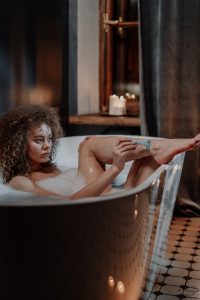 It may seem like hair removal is a modern thing.  With the popularity of wax treatments, laser hair removal and the more conventional razors, it seems that most 21rst century women are onboard with the idea of a hairless body.  In fact, it’s been estimated that 95% of young North American women remove their underarm hair while 92% efface the hair on their legs.  But it might be surprising to find out that hair removal is far from a new phenomenon.  To answer the question of “When did hair removal become popular?” we have to go back to the earliest recorded practices of the ancient Egyptians.

Although there were undoubtedly generations of women interested in beauty long before ancient Egypt ever existed, Cleopatra had the advantage of having her narrative permanently recorded and preserved.  This has led to her being acknowledged as history’s first recognized hair removal enthusiast.  There is evidence that ancient Egyptian women removed all their body hair, including that of the head, through the use of tweezer-like clam shells, abrasive stones, metals and bones as well as wax treatments.

It appears the hair-free preference of the ancient Egyptians was passed on to the Romans and the Greeks.  Using many of the same tools, such as tweezers, hard objects and waxes, the female upper classes of ancient Rome and Greece apparently removed most of their body hair – including the pubic hair.

As can be seen in many of the great artworks from the Renaissance period, hairlessness amongst women appeared to be the prevalent fashion.  This can be seen in depictions of goddesses, royalty and other upper class women.  The removal of pubic hair, however, may have been more of a practical necessity as pubic lice was apparently a common affliction during this time.

In early 20th century North America, women’s magazines were becoming quite popular.  This gave advertisers access to a market that had been previously difficult to reach.  Along with changes in fashion such as higher hemlines and sleeveless dresses, marketers began to make the argument that female hair was unsightly.  Hence the beginning of a “new” industry that has evolved and grown into what we have access to today.