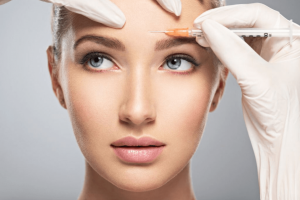 Botox has become one of the most popular non-surgical cosmetic treatments these days.  A lot of this likely has to do with celebrity culture and its praise for cosmetic procedures.  But for someone who’s never had Botox treatments before, there may be many questions about the injections.  One of the most frequent questions is, “How many units of Botox do you need?”  We’ll go over some of the more popular treatments in this article.

It’s important to remember that every person is different and there’s no single answer for every treatment.  The exact number of botox units needed for a procedure will depend on the patient’s experience (ie if they’ve received Botox injections before,) the shape of their face and the severity of the wrinkling.  The dermatologist will decide what’s best for the specific situation.

Wrinkles that occur between the eyes are often known as frown lines or “elevens” due to their resemblance to the number eleven.  Botox injections for the frown lines are usually located between and along the tops of the eyebrows.  The number of Botox units needed for frown lines usually totals between 20 and 50 units.  Initial treatments are normally assessed after two to three months with follow ups every three to four months.

Corners Of The Eyes

Wrinkles around the corners of the eyes are commonly known as crow’s feet.  Because of the proximity to the eyes, dermatologists usually err on the side of caution and will administer lower doses until the exact effects on the patient are known.  Crow’s feet are typically treated with 20 to 50 units of Botox.  An assessment is done after about two months and follow up treatments may take place every three to four months.