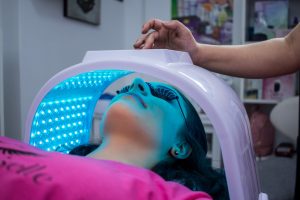 If you’ve been researching beauty treatments, you may have come across the term med spa.  What is the difference between a med spa and a day spa?  Even though the names are similar, there are some big differences between them and the type of treatments they offer.  In this article we’ll cover these differences to help you choose the spa treatment centre that’s right for you.

The main difference between med spas and day spas is that a med spa provides medical treatments that are often administered and/or overseen by a doctor.  A med spa will usually have at least one licensed medical doctor which allows them to perform medical grade treatments.  A day spa, on the other hand, doesn’t have an in-house doctor who can oversee the treatments. This means they’re limited to non-medical procedures.

The types of treatments you get in a day spa are those that don’t require medical supervision.  And while many of the technicians in a day spa are trained and qualified in their field of specialty, they don’t necessarily have to be a medical doctor or a registered nurse.  Day spas frequently offer treatments such as massages, facials, body wraps, botox, skin rejeuvination, velashape laser, aromatherapy and pedicures or manicures.  These can often be offered with other beauty treatments such as hair styling and make up treatments.

Some med spas will offer treatments that aren’t available in a day spa.  This can include advanced skin treatments such as medical grade peels, muscle relaxant injections and dermal fillers.  There are also certain body treatments that must be performed under medical supervision such as cryolipolysis (literally fat freezing,) laser treatment and radiofrequency procedures.  The common factor among all these treatments is that they must be overseen and/or performed by a medical professional.  Med spas may also offer many of the services provided by a day spa whereas the opposite is not true.